When the Chinese Virus raged in 2020, a global power shift was evident. India’s expanding role in the emerging world order was discernible. Our rebound from the Virus, the whole of nation pushback against China and vaccine diplomacy are fast forwarding this expansion.  When the CDS says ‘Military leaders will have to match political vision behind theaterisation’, he is indicating that the necessity of jointness stems from this rise. The need is for a unitary military outlook beyond borders in sync with the political hierarchy. After all, theaterisation is an out bound phenomenon. Theatre commanders will have to deal with borders and countries beyond. Fusion of political acuity and military knowledge will be mandatory.  Our PM has also said that India needs a ‘Future Ready’ force at the combined commanders conference. He has pointedly spoken of ‘shedding legacy systems and practices’ and called for a ‘holistic approach, focused on breaking down of civil-military silos and on expediting the speed of decision-making’ beyond weapon procurement. He has intoned the metaphysical aspect of India’s rise. If a ‘Future Ready’ India is to take its rightful place in the emerging world order, the politico-military paradigm needs a two way rebalancing.

Our PM has laid out a crystal clear aspirational vision. India needs to think afresh to achieve it. For that, we need an apolitical and honest discourse. I am deliberately stoking this issue in that context. Of course, we can continue to exist the way we are and deal with National Security as it were. We will then continue to suffer salami slicing on the LAC and Pulwama type of attacks in our hinterland. That is not being ‘Future Ready’. It is being ‘Past Imperfect’.

On 22 Feb, the PM , addressed the participants of the webinar on Galvanizing Efforts for Aatmanirbhar Bharat. He stated that India needs to prepare for threats beyond traditional domains. He reinforced my view. Multi Domain Warfare will the norm as I had predicted  in my article. This is beyond the constricted and restricted DIME (diplomacy, intelligence, military and economy) construct. The apple does not have to fall to predict that a toxic Pakistan and a predatory China will combine to weigh us down through multiple domains. Their capability based  multidomain models are highlighted graphically below and explained in detail in my article and explained in detail in the video above. 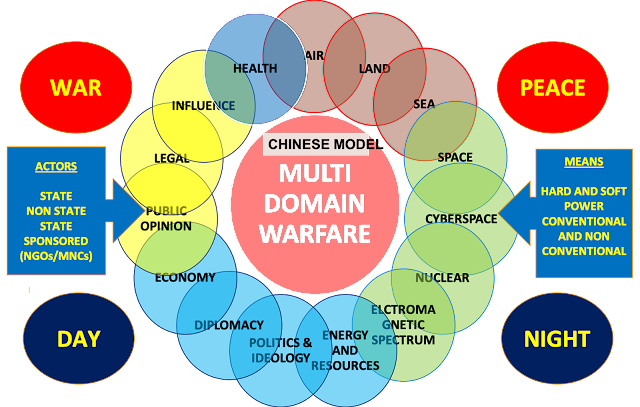 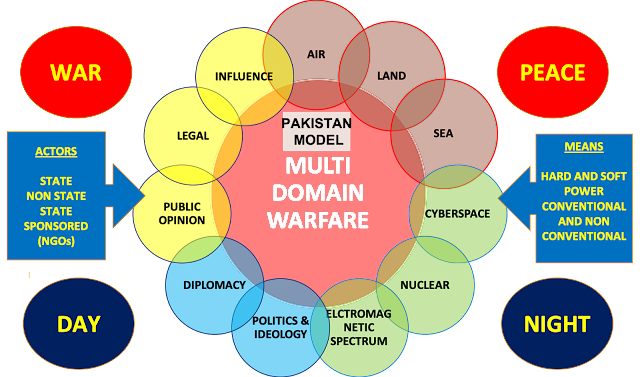 Disruption in military affairs could be ideological or technological. Pakistan uses radicalised Islam and China uses hard core communism for ideological disruption.  These revisionist ideologies cannot be defeated kinetically. They can only be countered by sound democratic principles and politico military cohesion. Technological disruption is based on emerging disruptive technologies. Multidomain warfare is propelled by these twin disruptions. As warfare has assumed ceaseless totalitarian proportions the relationship between war and politics established by Mao and Clausewitz assumes greater relevance. Without a strong Politico Military equation no nation will succeed in the futuristic multidomain paradigm. The domains depicted above are not flights of fancy. They can be substantiated  with ongoing examples. As domains expand, the requirement for civil military fusion will increase; which is feasible only if old silos are broken as stated by our PM. 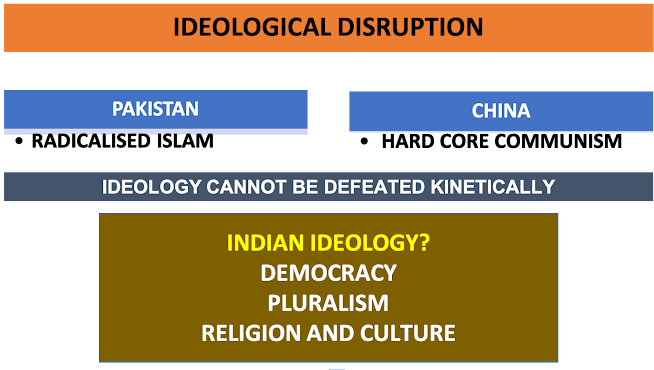 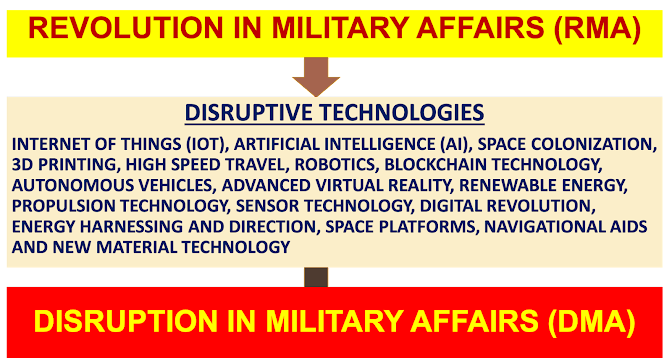 Our history is replete with politico-military models – fusion to diffusion. The trauma of 1962 is due to acute politico-military diffusion and over dependance on diplomacy. The IPKF operations, in Sri Lanka, started off with great fusion, only to culminate in multiple fractures as events unfolded. The political leadership, external affairs and defense were on different pages. Some part of our political firmament was even against our military. Our present strategic predicament in Sri Lanka has roots in the disaster of IPKF. On the other extreme, India’s greatest strategic moment came when it created Bangladesh through a high degree of politico-military convergence – before, during and after the 1971 war. In most other operations, India suffered embarrassing initial reversals. We managed to regain lost ground and emerge victorious by digging deep and developing politico military fusion on the fly. The Eastern Ladakh situation also fits the last model. The more we train in peace the less we bleed in war. Similarly, the more we prepare in peace the less we will be embarrassed in war. This simile was brought home by our PM during his address in the webinar. Overall, India has rarely used its peace well. Sustained marginalization of the military during peace and overreliance on bureaucracy has ensured that the nation – far from realizing its potential has been undermined due to this disconnect.

Look abroad. There is absolute politico-military fusion in our nuclear adversaries. In China, the PLA is the armed extension of the CCP. Xi Jinping,  Is the general secretary of the CCP and the chairman of the Central Military Commission. In Pakistan, the Army Chief is the single point political and military authority.  One can argue that these are autocracies. Look at USA, an equivalent democracy. Today a retired general is their Defence Secretary.  All previous administrations also had a number of veterans – both political and non-political inducted into government at various levels. Examine any great power of the past, present or future – without politico-military fusion they would not be where they were/are.

The territorial integrity of India is the responsibility of the politico-military leadership. However in practice the bureaucracy is wedged in to form a unique troika in managing politico-military affairs. This flawed structure has already costed India dearly. In a bygone era we could have got away. If India must rise to its potential there must be better politico-military fusion.  Examine it from a slightly different perspective. If our diplomats and bureaucrats can be inducted as ministers and other functionaries in government bodies, there is a need to think as to why Armed Forces Officers are not up there. Just a few retired Generals in inconsequential posts will not do. The belief that our nuclear, space and missile programs will provide us with security and stability is a fallacy, beyond a point.  Mere appointment of a CDS will not take us where we want to go. If our Nation has to be ‘future ready’, our political class has to be hands on with the armed forces – understand their ethos, traditions, thought processes, problems, outlooks and most importantly their strengths. The Indian Armed Forces have repeatedly proven that they are better than the best in any situation. This has come about despite weighing  down circumstances ranging from political neglect, lack of understanding and marginalisation. The few times they were invested in politically, the results have been outstanding. That has stood us in good stead so far. If the PM wants ‘civil-military silos broken and decision-making to be expedited beyond weapon procurement’, the political class must get more invested in the military on a one to one basis. The practice of  outsourcing defence issues to bureaucrats has to be revisited.

On its part, the military must also change. For a long time, the military remained aloof with its forbidding traditions and ethos. The political class also treated it as a holy cow and left it alone. Mutual convenience. While Armed Forces  remained apolitical they were a divided house.  The Armed Forces have a lot of walls to break  to effect the Political Military  fusion required for tomorrow. They have to get out of their own comfort zone. I had written last year in an article that  ‘ Indian military leadership needs a geopolitical vision and awareness of the domestic political landscape while remaining  apolitical’… ‘India’s military leadership is wracked by interservice dissonance’…’Our Armed Forces are manpower intensive’… ‘The Military leadership has not been able to get the best out of the existing system… Sitting  aloof and expecting  others to come up with goods will not work’…’ If you do not know what you want how do you expect others to give it to you?  The military must roll up its sleeves and get its hands dirty on the floor. There is no other choice.’   The effort should be to develop a culture of politico- military fusion geopolitically and politico-military diffusion domestically. The Indian Armed Forces need to seriously think of ‘shedding legacy systems and practices’ as mentioned by the PM. The internal Brahminical caste system prevalent in the Armed Forces is a cancer which needs demolition. There is no other way. I have written about it in my previous articles. At the same time, I would like to strike a note of caution. We need to safeguard against the ‘born again’ political greed. The Armed forces are the Last Bastion of the nation. It cannot politically crumble.

The evolving paradigm of Multi Domain Warfare needs convergence of many field and thought leaders. However, all these new domains will eventually trace back to the three fundamental domains of Land, Sea and Air where issues are played out by human beings. Hence the requirement for politico-military fusion at the apex is inescapable. How will this fusion play out in real terms? There are many pathways – reserved seats in parliament and assemblies, induction into ministries, service integration in MOD, responsible positions in defence/security related bodies, gubernational appointments, diplomatic assignments, UN assignments, think tanks, and more. I can write a thesis on this but let me highlight an example. The nation invests in every Armed Forces Officer for 3-4 decades to make a leader out of him. He is taught multiple skills which can contribute immensely to national growth and rise. At a point of time(often early in life) he is superseded, given an AWHO flat, a pension and sent out like Old Horse Dobbin Out at the Grass. He ends up disillusioned, agitating for OROP or something inane like that. What a monumental waste of leadership and talent. This applies equally to PBOR. It is only India which has the luxury of such profligacy.  When the PM talks of ‘shedding legacy systems and practices’ and a ‘holistic approach, focused on breaking down of civil-military silos and on expediting the speed of decision-making’ beyond weapon procurement, it is a two-way process to get the best out of the Armed Forces so that a rising nation prepares for its ordained role in global affairs.

It is possible that those who read this article feel that I am taking a swipe at my Prime Minister and CDS or talking of an imaginary never to happen scenario. No it is not so. I am convinced that they mean what they say. It needs to be achieved. I have also personally experienced the power of the politico-military fusion when late Mr Manohar Parrikar was the RM. God bless his soul. I saw it at work then. Not only in modernisation of Artillery, in which I was involved, but equally in other areas. Our relationship was so professionally invested that we never met other than at official events or prefixed meetings, never discussed anything other than the job at hand to the extent we never shared even a glass of water at our official ‘across the table’ meetings. We just got the job done. To highlight a case. India was woefully short of  Artillery ammunition in 2014. By the time surgical strikes of 2016 took place, we had enough ammunition to deal with eventualities. A total turn around in two years. Today we should be far better. How ? Politico Military Fusion. There is no other way for an aspirational India.  Otherwise we can talk big and remain static. The salami slicer will return and the deep state will unleash evangelical messiahs to continually alter the shape of India.

Why Is China So Afraid Of Quad?