How Many Chances Should Pakistan be Given even after it shows no intent to Change? Pakistan is a Terrorist Producing Factory of the world. It will not change.

The Financial Action Task Force (FATF) on Thursday decided to retain Pakistan on the “greylist” till the next review of its performance on the recommendations during the June Plenary session.

How Many Chances Should Pakistan be Given even after it shows no intent to Change?

While the Pakistan’s Terrorist Infrastructure is growing at a faster pace than before. While Pakistan continues to export and sponsor terrorists and arms and ammunitions to terrorists in India and Afghanistan, Pakistan also has increased its share in Terrorism in Middle East. Pakistan recently sent its terrorists to fight along side Azerbaijani forces and Terrorists from Syria, Lebanon and Turkey in war against Armenia.

However FATF does not find the evidences offerred sufficient enough to place Pakistan in FATF Blacklist. At a press briefing, FATF president Marcus Pleyer said although Pakistan had made a significant progress, it was still to fully comply with three of the 27-point action plan it had been presented with in June 2018 when it was first put on the “greylist”. He urged Pakistan to make fast progress on the remaining obligations.

The three points on which the FATF has sought urgent action by Pakistan pertain to effective steps — in terms of financial sanctions and penalties — against the terror funding infrastructure and the entities involved. After assessing the measures taken during the June session, the FATF would verify the implementation and test the sustainability of reforms undertaken by Pakistan to this end.

To a query as to when Pakistan would be put on the “blacklist”, the FATF chief said when the country had shown progress, it was not the time for such an action.

However China dominated FATF doesn’t consider the surge in voilence by Pakistan supported terrorists in Afghanistan and India of any consequence.

In Pakistan’s case, the international watch-dog has taken cognisance of the inaction against several banned organisations involved in raising funds for terror activities and those linked to global terrorists like Jaish-e-Mohammed chief Masood Azhar and Lashkar-e-Taiba’s Hafiz Saeed and its operations chief Zaki-Ur Rahman Lakhvi.

On several occasions, India has also raised the involvement of elements within Pakistan in a number of terror cases, including the 26/11 Mumbai and Pulwama attacks.

None of these terrorists have been handed over to India and they continue to brainwash and train more terrorists in Pakistan. Their financial structure that includes taking donations from Mosques and Madrasas in cash remains intact.

Globally, Pakistan has been condemned for its track-record on terror financing.

Pakistan is as serious about countering terrorist financing as China is about respecting Uighur Muslims’ human rights (incidentally, that genocidal tragedy is something Pakistan doesn’t seem to mind).

Which is to say, putting it politely, that Pakistan is not serious about countering terrorist financing. Islamabad has no interest in confronting the patronage relationships that sustain dozens of jihadist groups across its territory.

Pakistan Responsible for Terrorism in Afghanistan

Pakistan has been the only supporter of Taliban Terrorists that have killed Thousands of innocient civilians including women and Children in Afghanistan. Had it not been Pakistan supplying Arms, Ammunitions and funding to Taliban, sending radical islamist Pakistani Terrorists and Armymen in mufty dresses, it Afghanistan would have got peace years back. Most Notably, World’s Top Terrorist Osama-Bin-Laden was found inside Pakistan. Many of the worlds top 10 Terrorists are in Pakistan.

The Operation Enduring Freedom in Afghanistan, which began in October 7, 2001, caused the deaths of many soldiers during the period from 2001 to 2020.

The Operation Enduring Freedom was a response to the terror attacks on the World Trade Center and the Pentagon on September 11, 2001 and the beginning of the Global War on Terrorism. 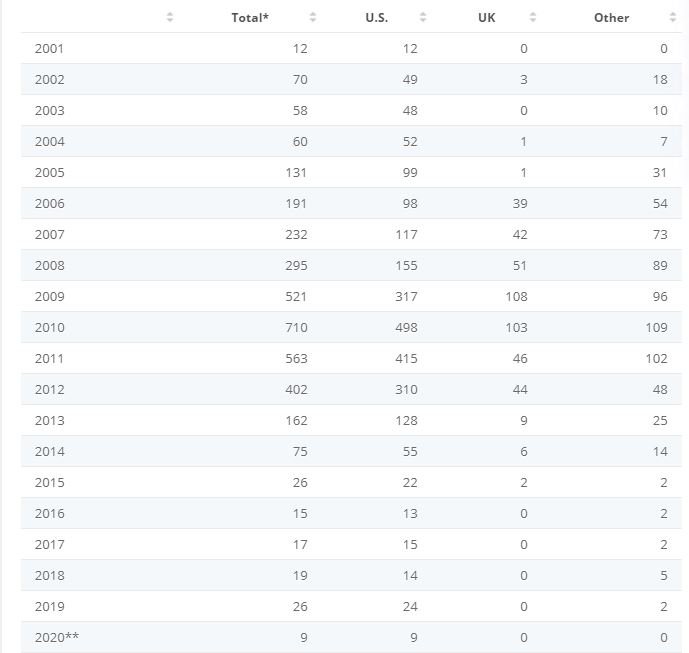 How Many Chances Should Pakistan be Given even after it shows no intent to Change? – Number of fatalities among Western coalition soldiers involved in the execution of Operation Enduring Freedom from 2001 to 2020.

Pakistan Responsible for Terrorism in India

Indians will Never Forget nor Forgive the series of Terrorist attacks Masterminded and carried out by Pakistani Terrorists on Mumbai, the Commercial Capital of India 12 years ago on 26/11/2008.

It was 12 years back on 26/11/2008 that Pakistan sent its terrorists to carry out deadly attacks in the financial Capital of India, Mumbai and kill innocent civilians including women and children.

Terrorist Nation Pakistan sent 10 Terrorists of a UN designated Terrorist Organization Lashkar-e-Taiba, based in Pakistan, and carried out 12 coordinated shooting and bombing attacks lasting four days across Mumbai. The attacks, which drew widespread global condemnation, began on Wednesday 26 November and lasted until Saturday 29-November 2008. At least 166 people including 6 US Citizens were killed and more than 300 were wounded. 9 Terrorists were also killed by the Indian security forces.

Again on 22nd September, 2020 huge quantity of Arms and Ammunition were recovered that were air dropped using drones by Pakistan Army and their Intelligence agency ISI for use by Terrorists on Indian side.

Several Tunnels have been discovered on the India – Pakistan Border to infiltrate terrorists, supply arms and ammunitions to terrorists on the Indian side of the border.

On 24-September another encounter broke out between Pakistan-supported terrorists and Indian Security Forces in Sirhama, Anantnag, South Kashmir, India.

Based on specific input a joint team of Army, Police & CRPF launched a CASO in Sirhama. As the team encircled the suspected spot, the hiding terrorists fired. 2 Pakistan sponsored Terrorists were killed in overnight encounter with Indian Security Forces.

On Thursday 24-September 2020, a young lawyer was shot dead by Pakistan-sponsored terrorists outside his residence in Srinagar, Union Territory Jammu and Kashmir, India. The lawyer, Babar Qadri, had expressed that he feared for his life a few days ago.

On 21-September 2020, an Indian soldier was wounded in an encounter that started Monday evening at village Nowhar in Chrar-e-Sharief area of Central Kashmir’s Budgam district in India.

According to data provide by the federal Home Ministry in Parliament, there were 443 incidents of violence during the 12 months prior to August 2019. Last year (from January to July 15), a total of 188 terrorism-related incidents had taken place in the valley, while this year around 120 such incidents were recorded during the same period.

We compiled a few of the recent terrorists related news reports reported by ANI in Indian Union Terriotry of Jammu & Kashmir. None of these terrorists would have been present in Kashmir had Pakistan not been involved in exporting terrorists, terror financing, suppling arms and ammunition to terrorists and Pakistan Army providing covering fire and doing ceasefire violations to facilitate infiltration of the terrorists to the Indian side of the line of control LoC/ International Border.

On 26-February 2021, Arms & ammunition recovered from forest area of Balakote by police and Army after a joint search operation was launched based on disclosure by an arrested terrorist; recoveries include 4 grenades, 15 pistol bullets & 10 AK 47 bullets.

On 24-February 2021, Four unidentified terrorists killed in an ongoing encounter in Anantnag.

On 16-February 2021, A small and low-intensity IED, kept by terrorists in a tipper vehicle, exploded at Pazalpora, Bijbehara.

On 13-February 2021, Zahoor Ahmad Rather, a terrorist affiliated with TRF (The Resistance Force) arrested from Samba. He had killed one Police personnel in Furrah, Kulgam and three BJP workers in Vessu, Kulgam last year.

On 5-February 2021, Three terrorist associates of Lashkar-e-Taiba arrested in joint operation by Bandipora Police and other security forces at Rakhi Hajin; arms and ammunition recovered from their possession

On 6-February 2021, Hidayatullah Malik, chief of Lashkar-e-Mustafa terror organisation, has been arrested from Jammu in a joint operation by Jammu & Anantnag police. Lashkar-e-Mustafa is an offshoot of Jaish-e-Mohammad in Kashmir. Hidayatullah Malik, a categorised terrorist, has been arrested near Kunjwani in Jammu. A pistol and a grenade have been recovered from his possession.

On 2-February 2021, Two terrorist associates of Jaish-e-Mohammed arrested in joint operation by Bandipora Police and other security forces. Arms and ammunition recovered from their possession.

On 29-January 2021, Three terrorists were killed in the operation at Mandoora Tral area of Awantipora.

Permanent Representative of India to UN at UNSC TS Tirumurti recently in a briefing on ‘Threats to International Peace and Security Caused by Terrorist Acts’ said, “It’s undeniable fact that terrorism continues to pose the gravest threat to humankind. Terrorism not only grievously impacts human life but also unroots the very foundation of humanity. Social media contributed to radicalization and recruitment of the youth. It’s essential that we don’t lose sight of the ease with which the proscribed Haqqani Network & its supporters, especially Pakistani authorities, have worked along with prominent terrorist organisation like Al-Qaeda, ISIL K, Tehrik-Taliban Pakistan etc in South Asia”

How Many Chances Should Pakistan be Given even after it shows no intent to Change? – Number of Terrorist Attacks by Pakistan-sponsored Terrorists in Indian Union Territory of Jammu & Kashmir and Number of Ceasefire violations by Pakistan Army to facilitate terrorist infiltration into India.

While People in Pakistan are struggling to get food, Pakistan Government and Pakistan Army is actively channeling the funds to sponsor Terrorist Activities in India and Afghanistan.

Pakistan is already bankrupt. International Monetary Fund (IMF) and WB bailouts to Terrorist nation Pakistan are only encouraging Pakistan to continue to grow its Terrorist infrastructure as these bailouts are not linked with any conditions to stop terror funding and export of terrorists to India or Afghanistan. These bailouts have no pre-condition to get a certificate from Pakistan’s neighbors like India and Afghanistan that Pakistan has stopped export of terrorists and supply of Arms and Ammunition to terrorists. Because of these loopholes, Pakistan is not showing any intent to change or payback.

There is no mechanism in place that can monitor that Pakistan Government and Pakistan Army is not channeling these bailout packages from IMF and World Bank into Terror infrastructure.

What is the relevance of United Nations and FATF in today’s scenario when it cannot protect its member states like India, Afghanistan from terrorism unleashed by a Terrorist Nation Pakistan?

Shouldn’t as a protest India, Afghanistan reduce funding to these UN institutions?