A recent statement on China Pakistan Economic Corridor (CPEC) by Ms. Alice Wells, a US diplomat and Assistant Secretary for South Asia has raised furor and debate within Pakistan if not world over. She warned Pakistan that the CPEC project will ultimately damage its economy with little return in the long run. The Project would profit only Beijing if China continues with its giant infrastructure push. She said, “It’s clear, or it needs to be clear, that CPEC is not about aid and is going to take a growing toll on the Pakistan economy since China’s multibillion-dollar initiative is driven by non-concessionary loans, with Chinese companies sending their own labor and material and effects would start visible soon especially when the bulk of payments start to come due in the next four to six years.”  Wells further said, “CPEC relies primarily on Chinese workers and supplies, even amid rising unemployment in Pakistan.” “Even if loan payments are deferred, they are going to continue to hang over Pakistan’s economic development potential, hamstringing Prime Minister (Imran) Khan’s reform agenda,” she said.

Quoting the case of a huge increase in the cost of up-gradation of railway projects from Karachi to Peshawar, she said, “CPEC’s most expensive single project is upgrading the railway from Karachi to Peshawar. When the project was initially announced, the price was set at $8.2 billion. In October of 2018, Pakistan’s railway’s minister announced that they had negotiated the price down to $6.2 billion, a saving of two billion. And he explained Pakistan is a poor country. We cannot afford this huge burden of these loans. But recent media reports claim the price has now risen to $9 billion. So, why doesn’t the Pakistani public know the price for CPEC’s most expensive project or how it’s being determined? Lack of transparency in CPEC project could increase project costs and foster corruption, resulting in a heavier debt burden for the country.”

CPEC was conceived as integrated and an extension of China’s “One Belt, One Road” initiative. The project proposed to be executed in three phases from 2014 to 2030 – short-term projects are estimated to be completed by 2017, midterm-term by 2025, and the long-term by 2030. The overall construction costs are estimated at $46 billion. It is the network of highways, railways, and pipelines to transport oil and gas. The first phase comprises development at Gwadar Port and the construction of an international airport. The Karakoram Highway connecting the two countries will also be widened, while the rail network between Peshawar in the north and Karachi in southern Pakistan will be upgraded. The two countries also have a plan of fiber-optic communication links.

The seeds for an economic route between China and Pakistan were sowed during the Musharraf era but took a shape and gained traction in May 2013 visit of Chinese Premier Li Keqiang to Pakistan. 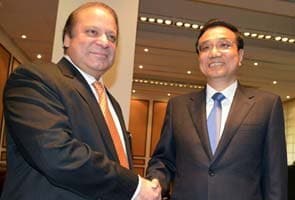 He signed the landmark CPEC agreement at that time followed by Pakistani Prime Minister Nawaz Sharif’s visit to Beijing when he signed eight agreements approximately cost of  $18 billion. Pakistan’s Prime Minister Nawaz Sharif again visited China in February 2014 and signed 19 agreements with China. At that time, the Chinese banks and companies pledged over US$ 45.6 billion for energy and infrastructure projects along the corridor. Chinese President Xi Jinping visited Pakistan in April 2015. During his visit, a total of 51 agreements were signed between China and Pakistan. CPEC originally valued at $46 billion now stands at more than$62 billion, which is almost 19% of Pakistan’s GDP.

As of March 2019, the public debt of Pakistan is estimated to be about ₨ 35.094 trillion which is 91.2 % of gross domestic product (GDP) of Pakistan, out of which approximately ₨ 18.17 trillion of domestic creditors and  ₨ 1.378 of Public Sector Enterprises (PSEs). Similarly, the external debt of Pakistan is now around US$105 billion. Pakistan owes US$11.3 billion to Paris Club, US$27 billion to multilateral donors, US$5.765 billion to International Monetary Fund, and US$12 billion to international bonds. Approximately, the fifth of the external debt which is estimated around US$19 billion is owed to China due to the China-Pakistan Economic Corridor. With ever falling foreign reserves at an alarming rate and increasing debt, it appears that Pakistan has been caught into the vicious circle of ‘debt – interest – loan to pay interest’ and CPEC is a catalyst in it. The apprehension of Pakistan going Srilanka way, it may lease out Gwader port to china on similar lines as that of Hambantota port when Srilanka failed to pay the loan, may come true.

Death For The Dictator: Interplay Of Pakistan’s Politics, Military And Judiciary – Analysis