Five people including a soldier were killed after gunmen stormed a five-star luxury hotel in Pakistan’s restive Balochistan province.  The attack on Pearl Continental in the strategic port city of Gwadar left four hotel employees and a Pakistan Navy soldier dead on 11th May 2019. Six others were injured, including two army captains, two navy soldiers, and two hotel employees.  All three attackers, who planned to take hotel guests hostage, had been killed.  It emerged that the gunmen forced their way into the hotel’s main hall, killing a security guard and firing indiscriminately as they attempted to reach the upper floors of the building.

The Balochistan Liberation Army (BLA) owned the responsibility for the attack. The group said that the hotel, the centerpiece of a multi-billion-dollar Chinese project, was selected in order to target Chinese and other investors.  Before we delve further, taking a brief account of BLA, its history and objectives will not be out of place.

The Balochistan Liberation Army also known as the Baloch Liberation Army is a Baloch militant organization based in Pakistan and Afghanistan. The BLA is listed as a terrorist organization by Pakistan and the United Kingdom.  BLA has waged an armed struggle against the state of Pakistan for equal rights and self-determination for the Baloch people in Pakistan, who have been subjected to repression for decades. The BLA is operating mainly in Balochistan, the largest province of Pakistan.  The target of its anger is mainly Pakistan Armed Forces. The Baloch Liberation Army’s moment of fame (or notoriety)  came during the summer of 2000 where it owned up responsibility for a series of bombing attacks on Pakistani authorities.

The Balochistan Liberation Army is a  Balochi ethnonationalist militant organization fighting against the Pakistani government for greater regional autonomy for the province of  Balochistan.  Most members are drawn from the Marri or Bugti tribes. It is postulated that the BLA may also be drawing members from political youth activists.  Although the group officially was founded in 2000, some analysts opine that the group is a resurgence of prior  Baloch ethnonationalist insurgencies and more specifically the Independent Balochistan Movement of 1973 to 1977.

The BLA formed in the summer of 2000 in response to growing resentment in Balochistan over the perceived government monopoly of Balochistan’s natural resources unequal allocation of jobs and favoritism towards  Punjabis over Balochi natives.  The organization came to limelight after they claimed credit for a series of bombings in markets and railways targeting Pakistani soldiers and police.  Throughout the rest of the summer, the BLA claimed eight more attacks. These attacks targeted Pakistani military locations and personnel using mortar strikes.  Following its founding, the BLA’s activities, particularly from 2000-2003, are undocumented.  However, in May 2003, the BLA carried out a string of attacks, killing police and non-native Baloch residents.

The following year the BLA attacked Chinese foreign workers that were involved in government-sponsored mega-development projects, which led to increased media coverage on the group and signaled the groups’ inclination to go after foreigners to draw Pakistani government attention.  The Pakistani government responded to these attacks by mobilizing an estimated 20,000 additional troops to Balochistan.

Despite the government’s military presence, the BLA’s attacks continued throughout 2003 and into the summer of 2004 with car bombs and numerous IED attacks. In 2005, the group carried out an attack on Camp Kohlu, which at the time was housing the visiting Pakistani President Pervez Musharraf. The Pakistani government designated the attack against Camp Kohlu as an attempt against the president’s life and led the government to label the BLA as a terrorist organization in 2006.

The two alleged leaders were considered to be some of the most influential people in Balochistan. These attacks, according to the Pakistani Human Rights Commission, were perhaps formulated to incite more counter attacks by the BLA, which could be used by the government to justify further intervention in Balochistan.

Around the same time, the Pakistani government gave rights to the port of Gwadar, located in southern Balochistan, to China on a forty-year lease.  The BLA and many Balochis interpreted the lease as Pakistani government’s yet another tryst to colonize Balochistan.  In September of 2008, the BLA, the Balochistan Liberation Front, and the  Baloch  Republican Army, and  Pakistan declared a ceasefire. The ceasefire was made with the understanding that the Pakistan government would meet with the three groups for negotiations.

However, the ceasefire was ended by the BLA in January 2009 because it was upset that the Pakistani government had made no meaningful attempts to begin negotiations.  On 15th April 2009 during an interview on AAJ TV, alleged leader Brahamdagh Khan Bugti made an appeal to Balochi people to kill any non-native Balochi residing in Balochistan whether they were military or civilian.   Targeted killings of Punjabi civilians broke out in Balochistan. The BLA claimed credit for inciting the violence, but according to some sources the killings were carried out by Balochi residents “answering the call of conscience ”.

In 2013, the BLA claimed responsibility for the attack on the historic summer home of the founder of Pakistan, Muhammad Ali Jinnah’s, a national heritage site.   Following the natural death of alleged leader Nawab Khair Bakhsh Marri In 2014, Marri’s six sons fought over the leadership of the BLA, it is believed that three of the sons left the BLA to help create a splinter group called the United Baloch Army.    Since then, the BLA has continued their operations against the Pakistani government and had begun to carry out attacks against the United Baloch Army.

The BLA seeks larger regional autonomy of Balochistan from Pakistan. The cluster believes that the principle on which  Pakistan was built on, that everyone in Pakistan has been created equal, was not followed by Pakistani governments in letter and spirit. Instead, ethnic identity takes precedence over a religious one.   Further, the BLA feels aggrieved over the fact that the central government of Pakistan inequitably distributes profits from natural resources within the region and jobs to Punjabis.

Pakistan’s port town Gwadar was subjected to an attack less than a month after the previous one.  On 18th April 2019, the Baloch activists killed fourteen security personnel by offloading passengers from a bus.  Pakistan has earlier blamed Afghan and Indian backing for the attacks in Balochistan.

Possibility of the Baloch insurgency being exploited by foreign enemies is highly unlikely.   In fact,  Pakistan has been alleged of supporting militant proxies within the region. However, these attacks raise an issue regarding the domestic conditions of the province, infested with militancy.

Moreover, the problem is not at all restricted to the Baloch insurgency. The province is also a breeding tract for extremist teams with linkages to terror organizations globally and regionally.

A Safe Haven  for Terror Groups

It is an established fact that the Afghan Taliban have been headquartered in Balochistan for years. Many Sunni extremist groups are also allowed to operate, which the Pakistani state uses to lure Baloch youngsters towards an Islamic identity exhorting them to associate with the Islamic republic.

Between these two groups also active is, the Pakistani Taliban who have fled the Khyber Pakhtunkhwa province and relocated here.  Then we have and the alleged Saudi-backed extremist groups that attack inside Iran, as acknowledged by Pakistan’s Prime Minister Imran Khan who affirmed on 21st April 2019 when he visited Iran that Pakistani soil was being used for attacks on Iran.  Intelligence and security circles in Balochistan several times have found to their astonishment that, the arms and explosives found in raids are Pakistan-sourced.

Why is it so Easy to Source Arms Locally? 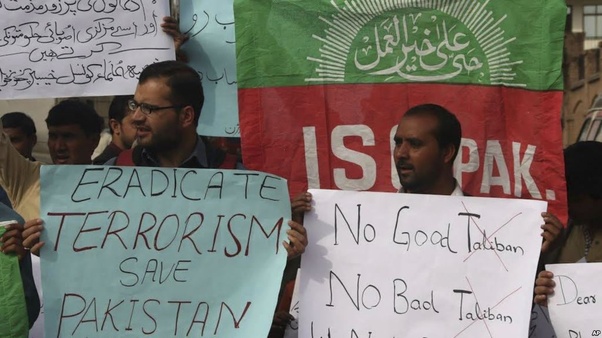 The problem lies with a totally faulty hypothesis of differentiating between good and bad terrorism that the Pakistani state seems to continue to employ. While it goes full bore after one kind of violent group, it condones the other. However, in reality, these groups collaborate with each other to facilitate weapon supply, training and providing moral support.

The mayhem in the tribal area north of Balochistan escalated for precisely same reason post 9/11 when the Pakistani military allowed refuge to fleeing Afghan militants, who then influenced locals to form the Pakistani Taliban.

Until 2005, the Pakistani military would often be seen literally mentoring many of these militants, calling them an asset to be used against India, if need be. But then these very militants went on to cause devastation on the Pakistani state, in a terror activity that continues to this day.

Pakistan is in the process of attracting investment in Balochistan, with the Chinese, Saudis and alternative international investors eyeing billions of bucks of investment however if it desires a stable setting, it must stop differentiating between good and bad terrorism so that it is able to fully decimate such violent groups.  It conjointly needs to  address the grievances of the native populace

In just Gwadar, many native fishermen have been displaced from the harbor they had fished in, for centuries.  It amounted to snatching their only source of livelihood from them. The port has been prorated to the Dragon. The de facto Chinese masters consider themselves all-powerful and have proscribed locals to fish in their waters. The fishermen have been complaining for months together but to there despair, authorities are simply not paying any heed.

The locals also have time and again, brought up the issue of severe scarcity of water in the area.  The Pakistani establishment is more interested in inviting the Chinese and offering them the local resources to exploit. Such a gruesome situation is vulnerable to exploitation.  Pakistan cannot expect the peace in Baluchistan until and unless it realizes that the solution to sustainable peace lies in addressing domestic problems.  It should stop attributing it to a foreign hand; acknowledge its own follies while handling such a delicate situation and act in a pragmatic manner to heal the self-inflicted wound.