My brother was killed on the streets in 1992. He was only 18. He was attacked by a mob of Chinese construction corps soldiers. He was killed in East Turkestan (also known as the Xinjiang region of western China) because he engaged in a peaceful protest with his friends against the millions of Han Chinese being sent into our homeland to dominate the land of our people, the Uighurs. I later gave his name to my newborn baby boy and decided to leave my country in search of a peaceful life for him in Canada.

To fly to Canada, we first had to travel to Beijing. Just before we emigrated, on our last night in China, my baby son and I were kicked out of our Beijing hotel room at gunpoint by Chinese soldiers. Why? Because we are Uighur, they wouldn’t allow us to stay in a hotel for Chinese. This nightmare occurred 20 years ago. My son, being a baby at the time, never knew what had happened, and I never told him about the fear I had that we would lose our lives that night.

I had thought that by escaping from the Chinese regime, I had guaranteed my boy a safe and beautiful environment in Canada, with all the opportunities he could want and need. Yet, last week at McMaster University in Hamilton, Ontario, when I made a presentation about the dire situation of our people, I realized that the shadow of the nightmare we experienced so many years ago had followed me and my son to our adopted country. 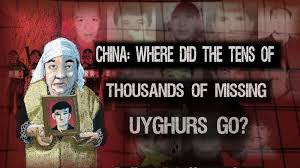 As I explained to my audience, the Chinese Communist Party has long aspired to wipe out the Uighur people and their identity. This was just as true 20 years ago as it is today, though back in the 1990s, the methods employed were gradual (such as the government’s calculated effort to change the demographic balance in East Turkestan by sending in Han Chinese).

Since 2017, however, Beijing has escalated its efforts dramatically. Today, there are more than 1 million, perhaps several million, Uighurs and other Muslims locked up in Chinese concentration camps. Conditions in these camps are horrendous — victims are subjected to physical and psychological torture under the guise of “re-education.” Moreover, Uighur children are forcibly removed from their homes to “break the lineage, break the origin, break the roots,” as Chinese officials have proudly announced their genocidal intent.

While I was speaking at McMaster about this horrible reality in East Turkestan, a group of Chinese students in the audience tried to disrupt my speech. One of them ostentatiously recorded the entire presentation and verbally assaulted me with foul language during the discussion period held afterward. Later, someone leaked a WeChat group discussion that revealed that the Chinese consulate may have directed the students to attend my event. The words of the participants of that WeChat group — including an exhortation to “find out about [her son]” — revived the feelings I experienced in that Beijing hotel room 20 years ago, even though I am a proud Canadian citizen and living on democratic soil.

The next day, these Chinese students reported the incident to the Chinese consulate, as is mentioned in their joint statement attacking my right to speak. In the statement, they also try to cover up China’s genocidal policy, claiming that I have fabricated the whole thing. The language of the statement exactly echoes the language of the Chinese Communist Party’s false propaganda line on what is really happening in East Turkestan. Despite the fact that the party has sent more than a million Han Chinese into Uighur Muslims’ homes to sleep with them, spy on them and coercively impose Han Chinese identity on them, the statement said that all nationalities in Xinjiang are living happily, friendly and in harmony. Nothing could be further from the genocidal truth.

The insulting and threatening words of those Chinese students dictated by the Chinese government grievously threatens the safety of every human rights defender who is opposed to Chinese President Xi Jinping’s repressive ideology and brutal regime.

The Chinese consulate in Ottawa on Saturday published a statement, praising the so-called patriotism of those students who attacked my Canadian right to freedom of speech.

Not surprisingly, this fascist form of Chinese nationalism not only opposes academic freedom and freedom of speech but also aims to bully Uighur family members who are citizens of Canada. Sadly, they don’t want to differentiate between patriotism and racist Han Chinese nationalism. What is clear is that the Chinese Communist Party has encouraged a large number of Chinese students that study in the West to export their lies about Chinese atrocities.

No matter how powerful the Chinese government may be, however, they will never succeed. Uighurs both inside China and abroad will continue to stand up for their rights and their identity as a people. But this task will become far more difficult if most of the world continues to stand by and let these crimes occur.